The World Ends with You

Needless to say, I have to review this game, because it is this game that I drew inspiration for the blog's name.

I think every gamer has a game that marks the console. For me, two games stand out in the Nintendo DS roster, one is the Ace Attorney franchise, in particular for reviving the Visual Novel genre of games outside of Japan, but the other, for its unique gameplay, has to be The World Ends with You. 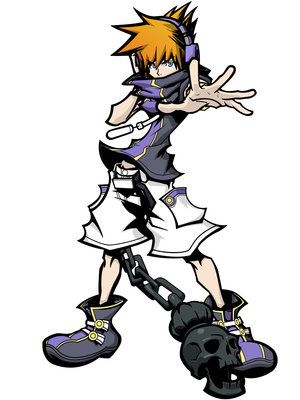 In it, you play as Neku Sakuraba, a teenaged amnesiac who finds himself going unseen in the bustling Shibuya. Not long after, he finds himself fighting mysterious monsters with alongside a girl named Shiki Misaki, who he must work beside in order to defeat creatures known as 'Noise'.

As a game, there are certainly a number of classic RPG tropes, the emo protagonist (Neku), amnesia for the sake of tutoring the player (Neku again) a girl in skimpy clothing (Shiki) and villains who want you dead for seeming little to no reason (Reapers), shopping for equipment, mini games, and more, but when you look below the surface, the characters are well-developed and quirky, including the antagonists.

There are two things that stand out in particular. One is the combat, which not only combines both screens, but both characters share health. Neku's combat takes place on the touch screen while Shiki's is on the top screen. If controlling both is too much, Shiki will switch to an AI, which, while not an amazing fighter, is good enough that you don't want to pull your hair out in sheer frustration.

The other is the soundtrack, it is, without a doubt, the most diverse, from cheery chip tunes to rock, fitting for a trend-setting part of Tokyo.

Sadly, since it was an experimental game, it didn't get the marketing nor the unit budget this gem of a game really deserved. If you get the chance to play this game, jump on it because this is a game that will not disappoint.

August 30, 2016
A couple of times a year, Xander eats something with wheat on purpose. What is this madness? Well, first of all, let me explain what separates allergies from other intolerances. An allergy is when the immune system develops antibodies against something relatively harmless. When we are exposed to a pathogen (a disease causing microbe) our body's biggest defence is antibodies, which are generated by a specific kind of white blood cell. Antibodies are designed to target specific antigens, which are markers for these pathogens. That said, in order to develop these antibodies, our bodies need to be exposed to these pathogens or allergens. This is why we have vaccinations, and why fatal allergic reactions are rarely the first exposure. Allergies is when the allergen is believed by a person's body to be a pathogen and the immune system reacts to it. The things we suffer as a result are in fact our body trying to purge us of the allergen. This is not to be mixed up with autoimmun
Read more