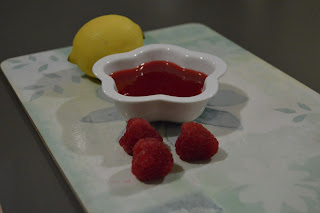 I briefly mentioned in a tips that you can add sauces to my coconut milk ice cream for added flavour. I researched ripples in ice cream after an event late last year.

In early December, Xander and I went to Belfast and stayed for a few days in the house of one of my aunts, who lives close to the city centre. There were a lot of reasons to go there, and it was a very personal time, but part of it was we went to the theatre together. My aunt, a tiny, but fierce woman, insisted on buying us something while we were there, so Xander picked out some wine gums while I chose a small raspberry ripple ice cream. While I was eating it, not wanting it to melt, Xander told me that he liked and somewhat missed this tangy, creamy treat. Despite being together just over five years I hadn't actually known that, especially since he wasn't known for liking fruit all that much.

So as some fire for food kicks back, I go to the supermarket and pick out a punnet of raspberries, picking brighter ones for their tart flavour. This is the result of my labour, a bright red, tangy sauce that goes beautifully with the creaminess of the ice cream.

Put the raspberries and water in a saucepan on a low heat, stirring occasionally.
Add the sugar and lemon juice, continue cooking until the raspberries 'dissolve' into the sauce.
Take a fine sieve and strain the juice before mashing through the pulp with the back of a spoon or spatula, using a clean one to scrape off the pulp as it builds up on the outside of the sieve.
desserts fruit recipes

The Oven is Fixed!

September 16, 2016
I mentioned this briefly on Twitter, my landlord's handyman came in yesterday and fixed the oven, but before I reveal what happened, let me remind you what prompted me to call in the professional on this. When I used the oven, I realised there was a strong smell, like fish, coming from it. I cleaned it thoroughly with oven spray, let's just say it needed that, but the smell remained. Pattering around on the Internet I came across a thread on netmums wherein one user, Jodie, suggested the smell is a sign of failing electrics and to get them checked. This actually made sense because while the hob is gas my oven is electric. I called my landlord and switched it off at the mains, using matches for my hob so no one forgot to turn it back off. So yesterday, while I was already at work, the handyman arrived. Xander went to work before he could look at it, but what it boiled down to was the plug had shorted. So he cut the burnt off bits, installed a new plug and reassembled
Read more