August 16, 2016
This has happened twice in three days, so I just feel the need to get this off my chest.

On twitter I came across a tweet of someone fed up with explaining that coeliac disease, wherein gluten prompts inflammation of the gut. I commented that my experience was that gluten seems to be the buzzword for the matter while those who are allergic to wheat and only wheat are left in the background by comparison.

One example that really spells this out is when I put a question to Lucozade, Xander was a fan of the orange flavour product, but he suffered an allergic reaction. Thankfully for him this is a temporary discomfort and not something more serious, but after putting up my Twitter account I thought it wouldn't hurt to ask.

As you can see, I state wheat allergic, not gluten.

Awareness of coeliac disease and the fact that not eating gluten has become a fad has prompted gluten to be something of a buzzword in health circles. However, those who are allergic to wheat, such as Xander, are reacting to a very different protein which is unique to the modern wheat grain. This is why while he can't eat wheat, he can eat its ancestor, spelt, along with barley and rye, all of these contain gluten.

Those who are allergic to wheat have to be wary of two foods that can contain traces of wheat protein that is gluten free. Glucose syrup is one of them. The other is monosodium glutamate or MSG, a flavour enhancer.

Today, I got the answer I actually wanted while I was at work. Lucozade use both wheat and corn as sources for their glucose syrup, however... 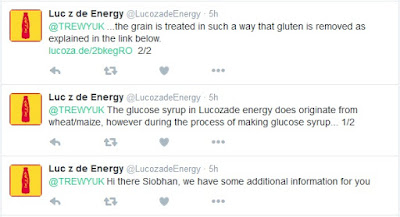 Bearing in mind that the thought to start this conversation was in part because I wrote this.

Yes, I let out a groan when I read this.

Have you had a similar experience? Let me know about it.

November 04, 2014
The original recipe is actually from a student cookbook I bought myself while I was studying in Liverpool. I love serving them with blueberry sauce made with maple syrup. Makes about 12 150g Dove's Farm wheat free self-raising flour blend (available in the free from section of most supermarkets) 1/2 tsp salt 2 tsp caster sugar 1 large egg, beaten 150ml Rice milk (plus a little more for consistency) Dairy free spread (at Xander's house, the spread of choice is Vitalite sunflower spread) Sift the dry ingredients together. Beat the egg into the milk and pour the mixture into the mixing bowl bit by bit. Heat a frying pan over medium heat and lightly coat it in butter. Use a tablespoon to drop the batter into the pan, careful not to put them close together in case they spread out. Turn them over when the top appears porous and leave for a moment before taking out of the pan and putting on a plate. Best served while still warm. The best part about this recipe is tha
Read more